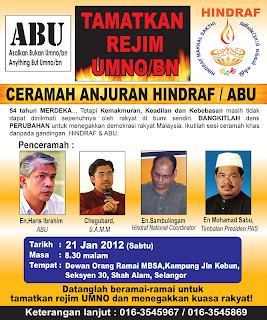 Hindraf does not support ABU, but supports ‘ABUR’ (Anything But Umno and Pakatan Rakyat Racism)

(Free Malaysia Today) - The Hindu Rights Action Force (Hindraf) has withdrawn its support for the “Anything But Umno” (ABU) movement and has advised members against attending ABU events.

Hindraf said that it was not siding with any party but will fight against racism directed against the Indians.

“Hindraf does not support ABU, but supports ‘ABUR’ (Anything But Umno and Pakatan Rakyat Racism),” said Jayathas.

“Hindraf will not allow ABU, Bersih (election watchdog), Pakatan or any other party to make use of Hindraf for their personal agenda,” he added.

This statement comes in the wake of an incident last Saturday when an event jointly organised by ABU and Hindraf in Jalan Kebun, Klang, was disrupted by alleged Umno supporters.

In the fracas that ensued, one Hindraf supporter was injured. Participants said that racist slurs were hurled against the Indians present at the event.

Hindraf added that the decision (to withdraw support for ABU) was arrived following a video clip of the alledged assault.

Subsequently, Hindraf has been receiving numerous phone calls regarding the incident.

Turning to the Pakatan, Hindraf said the coalition did not provide sufficient “security” for the Hindraf members at the event.

“(The fracas) was silently watched over by PAS, PKR, and ABU leaders who were seated on the stage and there was no public condemnation of the interruption,” it added.

Following the incident, ABU has filed a police report yesterday.

Hindraf also said that it will only support Pakatan in the upcoming general election when the alliance officially endorses in writing Hindraf’s 18-point demand and give its word that it will implement all the demands when it comes to power.

The demands call for an end to institutionalised racism targeting poor Indians.

Hindraf added that it will continue to speak up for the Indian poor without fear or favour, whether it is against the BN government or Pakatan.

Jayathas’ statement, however, does not seem to have the full support of other Hindraf leaders, with several national coordinators stating that they would continue to work with ABU.

Email ThisBlogThis!Share to TwitterShare to FacebookShare to Pinterest
Labels: HINDRAF